We’re proud to announce a new kind of packaging for refill pouches… now when you want to refill your tin, there will be ZERO packaging waste!

Not sure what Omnidegradable means? Here’s the down-low: regular plastics take centuries to decompose and are clogging oceans, landfills and sewers.

Omnidegradable Plastics are fully backyard compostable, meaning that you can throw them in your home compost and they will fully decompose in a very short amount of time (including the zipper on the pouch!). Even if they end up in a landfill they will biodegrade naturally and much quicker than other forms of packaging.

If you don’t have a home compost then we recommend reusing these pouches! These can be rinsed out and are shelf-stable indefinitely. They can be used to store Cheese, Meats etc. instead of using plastic zip-lock bags.  Want more info? Click here.

Ahhh Southern Sweet Tea, a classic! Of course, we had to put our own Kenyan twist on it by using our Mt. Kenya Black Tea. Mt. Kenya Black brings malty and sweet flavours with notes of dried fruit and cocoa bean, giving this southern classic a Kenyan punch!

We tried to think of some ideal situations to sip on this, but to be honest this classic goes with just about anything in the summertime! Sitting at your desk getting through the workday, in the backyard putting in some time in the garden, you name it! Southern Sweet Tea (Kenyan style) has got your back.

Of course, this classic is SO simple and takes only two ingredients aside from water, but it can be hard toying with those few ingredients to find a perfect balance between malty black tea and sweet sugar. We wanted to share this with you because we think we have found the perfect combination. So experiment no further – the perfect Southern sweet tea is here!

Is there anything better than pulling an ice-cold popsicle out of the freezer on a hot summer day? Yes, pulling out an Iced Tea popsicle!

It comes as no surprise that our best selling Purple Rain is ALSO delicious in popsicle form. This blend is bright and tropical and filled with juicy passion fruit, sweet lemongrass, crisp apple, and a hint of hibiscus. So good.

We also love how versatile these are. You can play around with this super simple recipe to fit your taste by adding in some fresh juice, fresh fruit (fresh berries would be delicious ?) or tweaking the amount of sweetener.

And since it includes Purple Tea it is packed with health benefits. Purple Tea contains anthocyanins, a ‘super’ antioxidant that has been shown to lower cholesterol, improve immune health, and help as an anti-inflammatory. If you want to learn more about the benefits of anthocyanins check out our blog post on the benefits of Purple Tea. Healthy popsicles that also taste good!? Sign us up.

Ahhh summertime… sunburns, sandy toes and permission to declare it happy hour any time of the day. Whether you’re at the lake, lounging at the beach or dining al fresco, this cocktail has you covered.

The name “Iced Tea Lemonade Mojito” may sound daunting and complicated but it only takes a handful of ingredients and less than 10 minutes to make. You’ll have your feet up sipping on this tasty cocktail in no time, we promise!

This recipe pairs three of our favourite summertime things: iced tea, lemonade and mojitos! It’s so much better than any of those premade hard iced teas or lemonades you can buy at the liquor store. It’s full of fresh and delicious ingredients, and our Mt. Kenya Black tea gives it an extra oomph of real tea flavour (and a slight hit of caffeine).

*We use vodka in this recipe but we’re sure rum would also be delicious. Skip the vodka if you’d prefer to stir yourself up a mocktail!

We are deep into the Summer months now, and here in Vancouver, BC it’s definitely starting to heat up. As the day progresses we’ve found ourselves swapping our daily cup of hot afternoon tea for a variety of fruity, iced ones. And this simple recipe has become a definite favourite among our team here.

We love this recipe for those hot summer late-afternoons when you’re craving something light and fresh with just a slight caffeine kick. And that’s where our Purple Rain comes in. Our best selling Purple Rain tea is a glorious blend of purple tea, lemongrass, hibiscus, apple pieces, rosehips and passion fruit. Add a little pomegranate, lemon and strawberry and this tastes like summertime heaven! You can also whip this one up in 15 minutes, who doesn’t love that?

Did we mention this iced tea recipe is full of health benefits? This recipe includes Purple Tea and Pomegranate juice, so it’s is a powerhouse of antioxidants! Both Purple Tea and Pomegranate contain Anthocyanins, a ‘super’ antioxidant that has been shown to lower cholesterol, improve immune health, and help as an anti-inflammatory. If you want to learn more about the benefits of Anthocyanins check out our blog post on the benefits of Purple Tea.

Purple Tea also has just enough caffeine to give you a little boost, but not so much that you can’t sleep if you find yourself sipping on this after 3:00 pm. So basically, this iced tea recipe is refreshing, delicious, full of antioxidants and has just the right amount of caffeine.

BBQ season is upon us, and if you’re like us you probably don’t want to spend hours prepping. So here’s how to make a fast and delicious pitcher of Classic Iced Tea. And no waiting overnight for it to chill. With this easy recipe, you can have your tea, and ice it too 😉

Of course the easiest way to make Classic Iced Tea is to brew a pot of tea, and simply leave it in the fridge over-night. But when the sun is shining, ain’t nobody got time to wait. Here’s a 5-minute cure for the summer heat.

You don’t need to be super specific how much ice is going in – especially if you are going to serve it right away. Somewhere between 2-3 cups worth of cubes will be fine, as long as it chills and dilutes the tea concentrate. Add the sugar when the tea is hot so it will dissolve faster. Adding the lemon to the hot tea will make it go cloudy, so wait until the ice has done its job in cooling it down. The ice will cool it down, but just to be sure, plop a few cubes into each glass before serving. And don’t forget to put the kettle on for the second round!

After over 24 hours of exhausting travel from Vancouver to Seattle to Amsterdam and finally to Nairobi, we were relieved to arrive and rest at our hotel. Little did we know an historic ivory burn, a call to end the ivory trade worldwide, was taking place in Nairobi National Park. We’d already planned to visit the the National Park for a safari tour, so we were grateful to have the chance to also see and experience this event first hand. 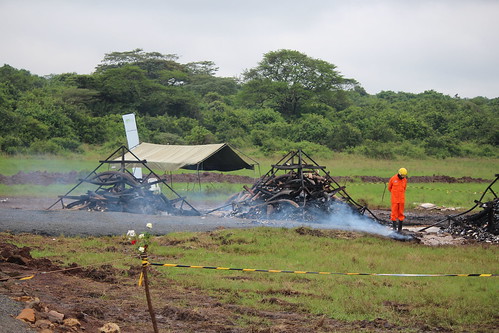 The “Worth More Alive” Movement
We witnessed a pivotal moment in the ivory trade history: 105 tons of elephant tusks and 1.35 tons of rhino tusk were burned to protest poaching of elephants. Africa’s elephants might face extinction by 2025, so African leaders collectively decided to do something they’ve done three times before: destroy almost the entire stock of ivory expropriated by Kenya, equivalent to the tusks of 6,700 elephants!, Kenya hopes that the burning of ivory tusks will show their commitment to ending the illegal business and convince buyers that ivory is worth more on the elephant than it is as a jewelry.

Some conservationists argue against this action. They believe destroying such a significant amount of the outlawed commodity will instead increase its value and demand. Wildlife officials from places like Zimbabwe and South Africa disagree as well, where elephants are more effectively protected and profits go back into conversation. These officials describe the tusk burning, which takes at least a week to finish, as a publicity stunt with insufficient proof that it results in lower demand. 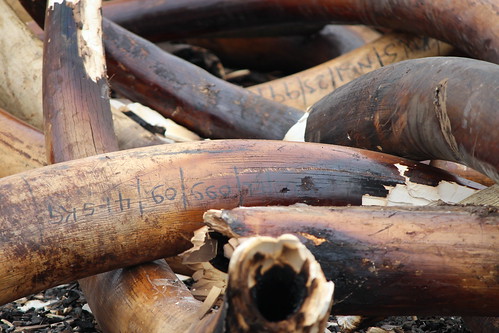 The Race to Save the Rhinos
The rhino population is in even more jeopardy than elephants. Once abundant, there are now fewer than 30,000 rhinos in Africa, compared to 500,000 in the early twentieth century. Many sanctuaries have been built and heavy protection has been implemented around the last three remaining Northern White Rhinos in Kenya. Although these persistent efforts have had some positive effect, the growing demand from Asian countries have been driving up rhino horn prices. Kenyan poachers can sell a single rhino’s horns of a single rhino for approximately $50,000. 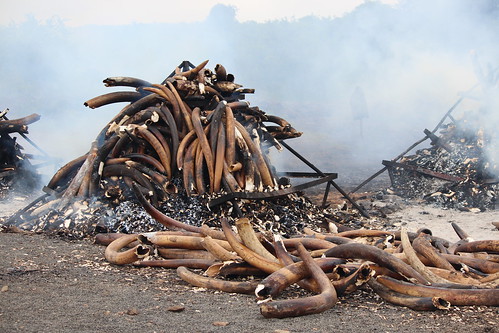 The Next Steps
Several different solutions must combat poaching and the glorified ivory culture: environmental education, community conservation programs, and strict anti-poaching measures. Although there are many sides to the argument, we do know is that the continuing existence and protection of these precious animals is incredibly important for future generations. Our treatment of animals reflects our societal values.

Although there’s no single perfect answer, any solution must start with awareness. We implore you to join the conversation: use the hashtags #WorthMoreAlive and #StoptheTrade. Help shine a light on these critical issues.

Welcome to JusTea!We’re so glad you’re here, and we want to spoil you.

Sign up for deals, giveaways, updates from Kenya, and to receive

10% off your first order
Scroll to top